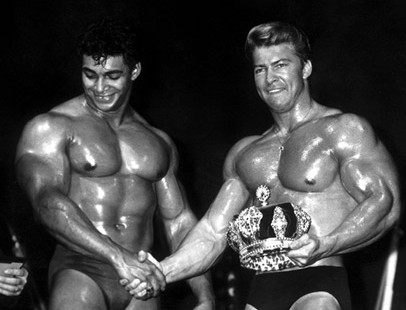 Bodybuilding in the 1960s

The move to the professional world was not much of a monetary one as most winners made only a small amount of money. However, it was the fame that came with it that propelled bodybuilders to attempt to climb to the top.

The first Olympia winner, and he won it twice, was Larry Scott. He was a student of Vince Gironda, the Iron Guru, who was in his heyday of instruction as well. Larry Scott had a well proportioned physique and some of the thickest arms imaginable.

Sergio Olivia followed Scott, and his nickname "the Myth" fit him well. He was well known by just his first name also. He had astonishing size – incredible chest and arm musculature, a huge thick back, and huge thighs. One would have thought no one could best Sergio, but Arnold came over from Austria and took over the Mr. Olympia title from Sergio.

Arnold ran out the 60's with the title, and into the 70's as it seemed no one could beat him. He and his training partner Franco Columbu dominated the sport.

As with every era, there was a compelling aesthetic candidate, and for the 60's (and 70's and 80's for that matter) it was Frank Zane. Frank even beat Arnold, but not in an Olympia competition.

Another element started to dominate in the 60's and that was the use of steroids. It's effects were seen in the drastic increase in size of the bodybuilders of this era.