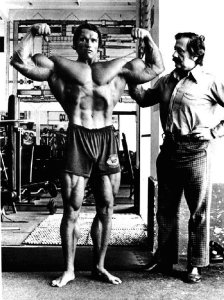 Arnold Schwarzenegger grew up in a small village in Austria, and felt that his ticket to a better life would come as a bodybuilder. In 1965, he served in the Austrian military for one year, which was mandatory. After making himself known world over as the most spectacular bodybuilder who ever lived, America was his next stop. He wanted to make a name for himself in motion pictures. After several movies including action and comedy films, he established himself as a true movie star. He is now the governor of California, yet another great role in his illustrious career.

Arnold Schwarzenegger's height was always believed to be 6' 2", but an article in US Weekly in 2002 speculated his height to be only 5' 10". While he campaigned for governor of California, it was noticed by many that his height appeared to be closer to 5' 10". Although part of this decrease may be due to age, it is unlikely that he has shrunk 4 inches in the aging process.

Arnold Schwarzenegger won the 1967 NABBA Amateur Mr. Universe title at 20 years old. He then proceeded to win the professional version of that championship in 1968, 1969 and 1970. In 1969, Arnold won the IFBB Mr. Universe and came in second to Sergio Oliva in the Mr. Olympia championship that same year. After this one loss, he never lost again. From 1970 to 1975, Arnold Schwarzenegger dominated the IFBB Mr. Olympia with six straight wins.

In 1977, Pumping Iron became a cult hit which documented the 1975 IFBB Mr. Olympia championship. This film focuses largely on Arnold Schwarzenegger along with Lou Ferrigno and Franco Columbu, his competitors, as they ready for the Mr. Olympia title. Go to Pumping Iron Video