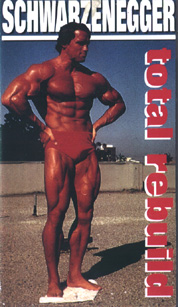 If you know anything about the sport of bodybuilding it will no doubt be the Pumping Iron. Either you have seen it yourself or you have heard about it if are into bodybuilding in any way. It was made by George Butler as well as Robert Fiore who both worked on the film when Arnold competed for the Mr. Olympia competition in 1975.

The movie put the sub-culture of bodybuilding on the map and has since been recorded and been sent around the world and seen by millions of people. In the 1980’s and the 1990’s it became the point of reference in all bodybuilding conversations held all over the world.

It was because of this bodybuilding milestone that Kit Laughlin decided to make a sequel at the 1980 Mr. Olympia contest featuring greats like Tom Platz, Frank Zane and obviously Arnold. It was Arnold who won that competition and as we all know put the sport of bodybuilding in the big time with his acting career that followed after he competed again in 1980.

This new Total Rebuild promoted as The Comeback certainly highlights some of the great names that we will never see in bodybuilding again. It was the old school bodybuilders who stood onstage packed with bulging muscles that started off the unprecedented growth in the sport.

Bodybuilders like Reg Park and Roy Callendar as well as Arnolds training partner who also won Mr. Olympia Franco Columbo. But there are other great names like Boyer Coe and the HIT master Mike Mentzer. In the new movie called The Comeback it has a completely different feel than the original Pumping Iron had and includes scenes with great bodybuilders like the Mr. Olympia winner Chris Dickerson.

If there is any disadvantage in The Comeback movie that is now set to replace the original Pumping Iron it must be the running time which is only 45 minutes. If we compare that to the original 90 minutes of Pumping Iron there are some hard-core bodybuilders who will think they have been short-changed by not getting all the footage in.

But The Comeback is hip and fast and easy to watch with a completely new soundtrack that makes the sport seem a lot more relevant than the rather loathsome twang of the 1975 soundtrack.