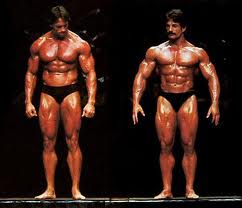 Mike Mentzer and Arnold Schwarzenegger represented the two main pillars of the 1970’s bodybuilding world. Arnold had established himself and his split training, mass volume program as the central manner in which to train, the program that most bodybuilders looked to emulate. But not all. Mike Mentzer represented the small but growing High Intensity Training approach, which featured all out intensity and a minimalist training session.

Not only were these two programs opposite, so were their main proponents. In fact they directly clashed. Mike and Arnold got into an argument at the 1980 Mr. Olympia, in a head-to-head contest. And although Arnold won the title that year, most people believe to this day that Mike was in better shape and should have won the contest. In the pre-contest meeting, when Mike defended Boyer Coe on an issue, Arnold changed the subject by taunting a total non-sequitur at Mike, saying “'Mike Mentzer, we all know Zane beat you last year because you have a big stomach!' The two almost came to blows before others intervened.

The training approach of both men were vastly different, as was their approach to life. Where Arnold was more of a schemer, Mentzer was a thinker. Arnold would try to overturn or upset fellow competitors whereas Mike would help them out.

Arnold became more famous, going on to become an international movie star and the governor of California, but in the bodybuilding world Mike’s HIT training approach has actually picked up more ground since the time the two competed against each other and the HIT training style continues to become more popular across the board. And Mike spot as one of the sharpest thinkers and most respected athletes in the sport remains unchallenged.