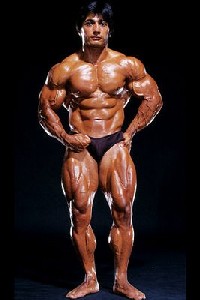 Danny (Dennis) Padilla began training at the age of 7 in Rochester, NY. He was born on April 3, 1951 and is an American bodybuilder.

Danny Padilla is well known in the bodybuilding world, not only for his ability to defeat tall opponents, but for his muscular symmetry as well. In 1970 while still in high school, Danny Padilla won the Mr. Rochester contest. From that moment on, he was hooked.

In 1975, Padilla decided to compete in the IFBB Mr. USA contest. This was his first time ever to see the size of some of the West Coast bodybuilders. He won the lightweight division, and also took the overall title.

In 1977 after a disaster with the Mr. Universe contest in which he was told he could not compete, Danny Padilla entered the IFBB Mr. America contest. He walked away with the title for his weight class as well as the overall title. He had beaten both a middle and heavyweight!

Danny Padilla is only 5' 2", perhaps the shortest bodybuilder in the history of the sport.

Danny Padilla has been given the nickname Giant Killer because of his shortness and ability to defeat much taller competitors. He made a habit of beating opponents who were much taller than he was over his 22 year career. In many contests, he still ranks as the best short bodybuilder in history.

Danny Padilla was the youngest ever to win the title of Mr. Rochester at just 18 years old. He went on to win the 1975 IFBB Mr. USA, 1977 IFBB Mr. America and finished at the Night of the Champions in the top ten.

In the highly popular semi-documentary film Pumping Iron, Danny Padilla had trained for the Mr. Olympia title along with all of the other star bodybuilders, only to be told he could not compete. After all the disappointment, the film was cut but he still has a brief part in the film. Go to Pumping Iron Video