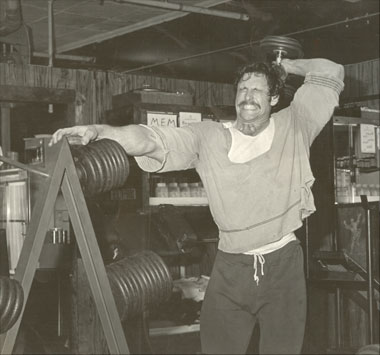 Steve Michalik was born on January 8, 1949 in Brooklyn, New York. He won the 1972 AAU Mr. America contest. He worked as a commercial artist, gym owner and personal trainer. He died by suicide, he shot himself in the head, on May 24, 2012.

His high volume training system which he called Intensity or Insanity, had him doing up to 70 sets per body part.

So, the question many people ask - Is Steve Michalik workout actually Intensity or Insanity?

The answer is - it's insanity. 100% crazy along with the man himself.

Steve Michalik was a very disturbed individual, he grew up being physically and mentally abused by his father, he was committed to a mental institution and treated by physiatrists for many years, and if you've ever known anyone who has been in the hands of physiatrists you know they never get better only worse.

Steve took up bodybuilding to be like his hero Captain America, yet no matter how big and strong he got he never got over his insecurities - he needed constant praise and attention.

He himself became an abusive person, prone to rages, yelling, screaming, threatening, breaking things, punching people and even attempting to drown his training partner.

He also cheated on any wife or girlfriend he ever had, having as many as 5 women on the side when he was married.

The point is this type of training comes from a disturbed mind.

Not only that but the huge amount of drugs he needed to take, steroids, HGH, as well as amphetamines so he could train for hours at a time, destroyed his body, he ended up needing both liver and kidney transplants. And by the age of only 63 his health and life were in such a shambles that he shot and killed himself.

This training system reflects Michalik's life - it is self destructive!