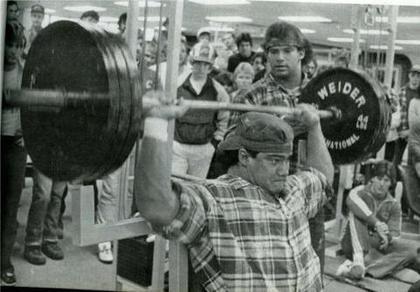 The Barbarian brothers were two of the most intense bodybuilders to ever workout at Gold's Gym Venice.

Peter Paul and David Paul were the Barbarian brothers who hit the gym and used huge weights to build their bodies. They were the rock stars of 1980's who also featured in the movie titled, "The Barbarians" and hence the name.

Talking about their personalities, they were like massive lumberjacks and had a distinct style dressed in flannel shirts, bandanas and boots. They stood tall with 6 feet and 6 feet 1 inch having 235 and 245 pounds respectively. They had 58 inch chests along 22 inch arms.

Heavy weight lifting was the philosophy of Barbarian brothers who did it on a grand scale. Their screaming and yelling while lifting weights was the sign of the hard work they were putting in.

They used low reps and the heaviest volume. Their workout routine involved the following different movements:

Behind the head press: They performed this exerciset with massive weight loads over 300 pounds. This involves many muscles and thus provides functional strength.

Reverse grip bench press: It is one of the chest exercises that used to be performed by the barbarian brothers. Their chest size was huge and very prominent. This is done by lying on a flat bench and grasping the bar with reverse grip, with hands and shoulder width apart putting the thumbs around the bar.

Super heavy dumbbell movements: Super heavy dumbbells means up to 200 pound dumbbells in each hand. The barbarian brothers used to find a rep range for themselves suiting them best and push further for heavier and heavier dumbbells. By doing this religiously, they made dramatic changes in their strength and size.

The Barbarian brothers never neglected their nutrition. They ensured that calories burned at the gym are restored with intake of the enough calories so that they would be refreshed and ready for the next day's workouts.