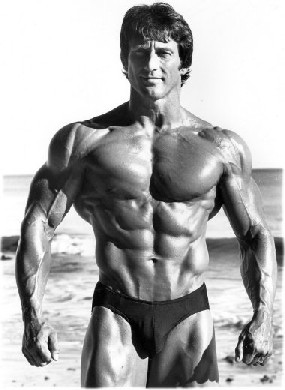 Frank Zane was born June 28, 1942 in Kingston, PA. He is an American former professional bodybuilder as well as a teacher.

Frank Zane held the Mr. Olympia title on three different occasions (1977, 78 and 79). He is one of only three who have beat Arnold Schwarzenegger in a bodybuilding contest. He has also written several books about bodybuilding.

He is one of very few Mr. Olympia's that weighed under 200 pounds. Frank Zane offers personal weightlifting training in San Diego, with his program called "The Zane Experience".

Frank Zane is not a fan of simple sugars, and eats some type of protein every few hours, along with complex carbohydrates (starchy foods). Avocados and baked potatoes rank high in his opinion. Proteins, starches and fats eaten in small amounts every few hours is what works for Zane.

Frank Zane also believes meat, fish and eggs to be of great value to the bodybuilder.

Those who have seen Frank Zane training have said that he is the most focused bodybuilder they have ever seen. He rests very little between sets, and continuously tries new training methods. He trains with fierce intensity and focus, rarely getting sidetracked.

Frank Zane believes that during training, you should stretch your mind and body to the limit.

In 2004, Frank Zane released "The Train with Zane Video." He also worked as the consulting producer for the 2005 movie "See Arnold Run." In this movie, Zane played the part of the IFBB announcer. He was also in "Pumping Iron" which is available on this site. Go to Pumping Iron Video