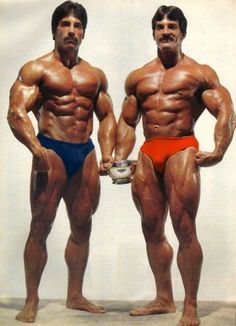 While many people know the basics of Heavy Duty training, the advanced techniques are known by only a few. The advanced and super advanced techniques were fully researched and tested by Mike in the late 70's, but following the infamous 1980 Mr.Olympia, Mike retired from competition. After that he worked as a personal trainer and concentrated on what works best for beginners and intermediates. And so Heavy Duty for advanced and super advanced trainees became all but lost, even though Mike made the best gains of his life using these techniques.

Climbing The Ladder Of Intensity

Mike knew that as a bodybuilder grew bigger and stronger, he would eventually require an even more intense training stress if he hopes to continue progressing. If the stress is not more intense he will stagnate and stay at the same level of size and strength.

For beginners starting a weight training program is a huge leap in intensity from not training, and this is why they make such rapid gains at first. To keep progressing they can simply keep increasing the weights and decreasing the rest periods between sets. When they stop making gains this way they are ready for the next level of intensity.

At this stage a more intense stress is required, this is be done by using Pre-Exhaustion sets, for example a set of Leg Extensions to failure followed by a set of Leg Press (or Squats) to failure. Also forced reps and negatives to go beyond the point of positive failure can be occasionally used. These techniques will carry someone into the advanced level, Mike reached this point and using these techniques he was unable to get bigger or stronger, this forced him to do further research into the highest levels of intensity.

At this level Mike found that he was so strong and his willingness to work at maximum effort was so high that each rep of a set was so intense that oxygen debt and lactic acid build up was practically immediate and severe enough that he was forced to stop due to cardiovascular limitation rather then because he reached a point of actual muscular failure. He looked for a way that he could do even more intense reps while at the same time slowing the build up of lactic acid and the onset of oxygen debt in his muscles.

The way he did this was to do his own version of Rest Pause training, he used a weight that would allow him to do one all out maximum rep, then rested for 10 seconds, this would give enough time for his muscle to clear out waste products and bring new fuel and oxygen so he could do another all out rep. After the second rep and another 10 seconds rest he would have his training partner help him do another all out rep, or he would reduce the weight by 20%. He would then rest 15 seconds and do his last all out rep. This was considered one set, with each and every rep of the set being an all out effort. An example rest pause workout that Mike would do for his chest was Pec Deck 1 set of 4 Rest Pause reps, Incline Bench Press 1 set of 4 Rest Pause reps and Dips (Negative only style) 1 set of 5 reps. Mike then had to ask himself what could be more intense then Rest Pause training?

Mikes next step up the ladder of intensity was what he called Infitonic training; he followed each maximum positive rep of a Rest Pause set with a maximum negative Rep. He had his training partner push down a little on the negative and he would fight to resist it, lowering it as slowly as possible. He then rested 15 seconds before his next maximum positive and negative rep.

The very highest level of Heavy Duty he called Omni-Contraction training, meaning all contraction. There are three ways a muscle can contract, that is lifting a weight (positive), lowering a weight (negative) and holding a weight (static).

In Omni-Contraction training Mike would make each a maximum effort. He would do his one all out maximum positive rep, followed by a maximum negative, but during the negative he would stop the weight and actually try to raise the weight again (which was impossible). He would do these static holds at three different points during the negative rep, the first was at the top, close to the fully contracted position, the second was halfway down and the third was close to the bottom position. Each position was held for a count of 3.

Mike and his brother Ray used these advanced and super advanced techniques in the summer of 1979 and it resulted in Mike gaining 14 pounds of pure muscle in 9 weeks (while losing fat and at an already advanced level of mass and strength), and winning his first pro show beating the likes of Robby Robinson, Danny Padilla and Roy Callendar. While Ray was able to improve so much he walked in and took the Mr. America crown that year.

So maybe, just maybe, if you have tried Heavy Duty and it stopped working it was because you didn't know the higher techniques on your way up the ladder of intensity. Try them for yourself and find out.

If you have any questions about Heavy Duty training, diet, etc. please email me info@trulyhuge.com or call me at 1-503-648-1898