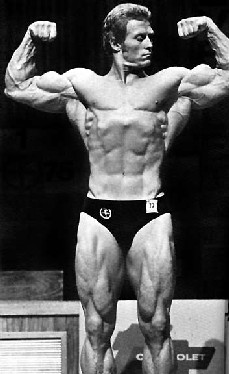 After serving in the United States Marine Corps and teaching high school in Louisville, KY Ken Waller went on to play professional football in Canada.

Ken Waller is was featured in the 1977 move Pumping Iron, and is an American former bodybuilder. He is one of the few redheaded professional bodybuilders in the sport, and was well known for his curly red hair and freckles.

Some say that Ken Waller went on to become a manager at the company that sells Gold's Gym merchandise, and was the manager of the Gold's Gym in Venice Beach. Other takes on the subject state that Waller has never been a manager of Gold's Gym.

Ken Waller was featured in the 1977 smash movie "Pumping Iron" which was a semi-documentary covering the days leading up to the Mr. Olympia championship. Ken Waller starred with many of the most well known names in bodybuilding including Arnold Schwarzenegger and Lou Ferrigno. Pumping Iron is still popular today. Go to Pumping Iron Video