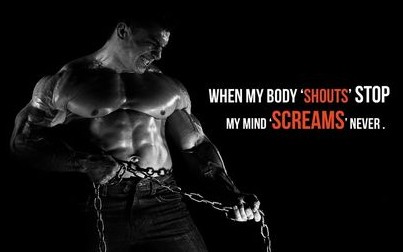 The best way to begin this section is a quote from Arnold, "It is always the mind that fails first, not the body."

"The best example of this I can think of occurred one day when Franco and I were doing squats in the old Gold's Gym. Franco got under 500 pounds, squatted down, and couldn't get back up. We grabbed the bar and helped him get it back on the rack. Five hundred pounds for even one rep was apparently just too heavy for him that day."

"Just then four or five Italian-American kids from New York came in. 'Wow,' they said, 'there's Franco! Hey, Franco!' They were great fans, and were looking forward to watching him work out - only Franco had just failed in a lift and it seemed probable that he would miss it again next try."

"I took Franco aside and told him, 'Franco, these guys think you're the king. You can't get under 500 pounds again and fail.' All of a sudden his face changed. He looked at me with big eyes, realizing he was on the spot. Then he went out into the street and spent a while psyching himself up, taking deep breaths and concentrating on the lift."

"He stalked back into the gym, grabbed the bar and, instead of doing the six reps he was supposed to do with 500 pounds, he did eight! The he walked away coolly as if it were nothing."

Man, that just says it all doesn't it? That's intensity for you! That's drive and determination manifested before your eyes. Have you ever had a similar experience in your gym? Have you ever failed at a lift, only to then get determined enough to come back and destroy the weight? If you have, then you can fully appreciate the role the mind plays in bodybuilding and fitness.

I've tried to teach myself how to use my mind more effectively in the gym. I observe the other guys working out, as well as the guys not working out. What are they doing when they lift? Are their buddies around them talking and joking? Is his girlfriend standing there in tight clothes? Maybe he's even reading the newspaper between sets. These guys may be big already, but how much more could they accomplish if they focused? Really focused on the weight, the lift, and the feeling in their muscles? Put everything else out of your head. Once you get to the gym, you're there to WORK! You're not there to play, or to talk, or to dilly-dally with the weights. No, you are there to do battle physical and mental against them.


The Mind to Muscle Link


How many times have you seen people doing bicep curls like they're going out of style? They're swaying back and forth, swinging the weight around. Some of them bend so far back that I think they'll snap in two. These guys aren't achieving the mind-muscle link. Not even close.

But what does the "mind to muscle link" mean? It means being in total control of your mind and body while doing a set. True bodybuilders feel every rep, and every muscle fiber pulling and stretching. When it comes time for their set, everything else is meaningless. It's them versus the weight. It's cold steel in their hands and the will to succeed.

I'm sure you've seen this in the gym before: a guy and his partner are readying themselves for a heavy set of squats. The squatter looks at the bar while putting his belt on tight. He steps up to it, grabs the bar with both hands and rocks the cage back and forth. Sometimes he'll talk to the weight or to himself. He'll mumble, curse, and growl. Then, taking a few slow deep breaths, he will position himself under the bar, placing it carefully on his shoulders. Then he says. "Ok, on three. 1....2....3!" He groans and lifts the bar off the rack, swaying a little from the poundage. Positioning his feet, he'll look in the mirror to see himself. At this point, it's all or nothing. If he gives up and puts the weight back down now, he'll beat himself up until he finally does it. So down he goes...

That's an example of powerful drive and determination. You have to be willing to go through the pain and suffering if you want to become a champion. You have to want to succeed so bad that it hurts. You must set goals that seem almost tangible.

When I do a set of curls, I'll grab some heavy dumbbells and hold them at my sides. Then, one at a time, I'll curl them up slowly and lower them even slower. As the weight comes down, I try to feel the muscle working and stretching. It takes a little practice to get good at this. But once you master the technique, you'll be better able to control your progress.


You Will See It When You Believe It


Once you believe your goals are obtainable, then you will see a way to get there. If you never believe it's possible, then you have already failed.

Editors note: For a full understaning of the mind check out Dianetics The Bestselling Book on the Human Mind