Out of all the Creatine's I've tried, from powdered monohydrate creatine to fancy sounding pre-made stacks, this Kre-Alkylyn complex called Pumped Extreme is hands down the best ever. The first part of this creatine review will be a Pumped Extreme Review, because it is the best creatine supplement that I have ever tried and it has given me the most muscular gains!

Having a sensitive stomach and an aversion to putting chemicals or anything unnatural in my body, this was like a miracle solution for me! Pumped Extreme comes in a capsule format, and you can avoid all the common side effects associated with traditional creatine use such as cramping, diarrhea, indigestion, anxiety attacks, etc. This was my experience anyway, and I cannot tell you that creatine works like illegal steroids, because it doesn't. I can tell you though that I have used many different brands in the past with minimal results, and now that I have used Pumped Extreme I have actually seen some great gains in strength AND muscle SIZE, and I haven't had any negative side affects! I have used it for over a month and a half to date!

For full details go to https://www.trulyhuge.com/creatine.htm

The 9 Principles of Old-School, High-Intensity Training 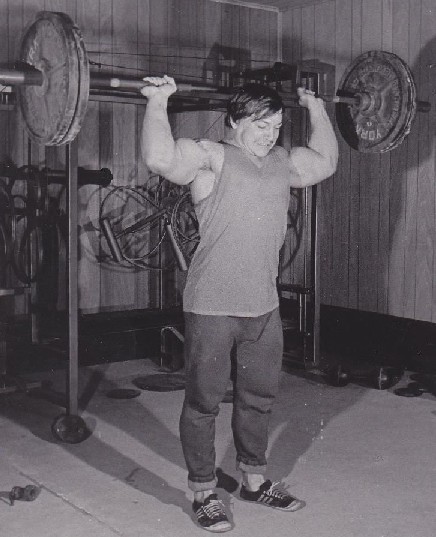 Even though there are many variants of HIT, Dr. Darden’s original version still holds plenty of potential more than 40 years later.

If you want to follow in the muscular footsteps of legends like Casey Viator and Mike Mentzer, here are the 9 principles of old-school high-intensity training.

Bodybuilders in Jones’ era were already beginning to split their body parts across several workouts a week in the name of hitting all the angles. But Jones and Darden emphasized a return to training the body as a whole, an approach that legendary bodybuilders like John Grimek and Steve Reeves used throughout their careers.

Many lifters get caught in the trap of dumping all their energy into showy muscles like chest and arms while neglecting core strength centers of the body like legs and back.

At best, they’ll throw in a couple of half-hearted sets toward the end of a workout when they’re already spent.

High-intensity training turns this idea around and has you begin with your largest body parts before moving on to smaller muscles as the workout progresses. A typical body part order might look like this:

Not only does this make sure you hit the big muscle groups with the most growth potential hard, it also cuts down on the amount of warming up you need to do once you get rolling.

One Set Per Exercise

One of the most polarizing aspects of HIT is its focus on performing just one all-out set per exercise.

The theory behind this principle states that, if you train hard enough to stimulate growth in any one set, then adding another is a waste of time and energy, and can lead to overtraining.

Part of the backlash against HIT comes from a misunderstanding of this point as one set per body part. While that may be true for smaller muscles like biceps, HIT workouts often include multiple exercises for larger muscle groups, like back and thighs.

In order to get the most out of your one set of an exercise, you have to train extremely hard. High-intensity advocates argue that the only way to know that you have done all you can within that set to trigger growth is to train to momentary muscular failure.

That’s the point at which you can no longer move the bar, and consistently reaching failure can be both brutal and productive.

Darden has always focused on the importance of proper form and relatively slow movements, and you should, too.

Good form makes your muscles work harder all along the range of motion than loose reps do, and it also makes injury less likely.

You DON’T need to go to extremes, though. Simply move slowly enough to avoid excessive momentum and don’t bounce at the bottom or top of reps.

For most exercises, that’s going to work out to be about 3 seconds up and 3 seconds down.

One of the controversial promises of HIT is its ability to improve your cardiovascular health. To enhance this effect, many trainers employ the “rush factor,” which simply means moving as quickly as possible between exercises. Some of Jones’ early studies involved NO rest between 12 different exercises!

It’s a tough way to work out but feels like nothing else.

The baseline of old-school HIT is to perform three workouts a week, a step or two down from the five or six days that many split routines call for. As you get stronger and bigger, HIT calls for you to reduce frequency in order to accommodate the greater demands on your recovery system.

Many HITers, both in Jones’ heyday and today, work out twice a week.

How do you progress in a strength training workout?

By doing more reps, using more weight, or both, from session to session.

That’s classic double progression — weights and reps increase over time — that underpins all successful training programs, and it’s a key component of HIT, too.

Above all else, success in the gym depends on consistency — in working out, in eating, in resting.

This holds true whether you use HIT, CrossFit, or a traditional volume-based bodybuilding approach.

Old-school HIT makes it simple to be consistent because it requires a modest in-gym time commitment and a straightforward path to performance and physique improvement.

If you want to learn ALL about high-intensity training to figure out if it’s the right approach for you, be sure to check out https://www.getbulky.com/high-intensity-training.html.