Creatine, as we've known it, is dead

The benefits of Kre-Alkalyn capsules, is that it's pH balanced to maintain stability for up to three years.

For full details go to https://www.trulyhuge.com/creatine.htm

Here Are 3 Different Types of HIT that Build Muscle Fast 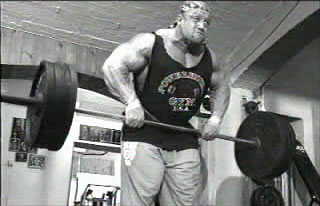 One of the really neat aspects of lifting weights to get big and strong is that there are so many varieties of training styles available. Even if you prefer to stick with one basic protocol like high-intensity training, or HIT, there are enough variations to keep you from getting bored for a good long while.

Here are just three of the different types of HIT that build muscle fast and will make you excited to hit the gym, year after year.

High-intensity training originally sprang from the work of Arthur Jones, the inventor of Nautilus. It called for lifters to train their entire bodies three days a week using about 12-15 different exercises for one set each at every session. Reps were slow — about two seconds for the positive and four for the negative — and weights were selected that allowed 8-12 reps to failure.

It’s a solid approach that lives on today with some modern tweaks through Jones’ student, Dr. Ellington Darden, who has written several popular HIT books.

Mike Mentzer was a massive professional bodybuilder who worked with Arthur Jones for a bit and took the message about brief, brutal workouts to heart. A very analytical thinker, Mentzer eventually refined his own training methods into a set of principles that he labeled “Heavy Duty.”

Beginning with HIT as his base, Mentzer discovered that he and his training clients did better with more rest for each specific bodypart, so he eventually developed a four-way split: back and chest, legs, shoulders and arms, legs (different exercises).

What really makes this form Heavy Duty stand out from other methods is that each workout consists of just one exercise of each of 3-5 exercises, and you only lift once every four or five days. If you’re doing the math, that could mean directly working each bodypart only once every 20 days or so. Late in his life (he died in 2001), Mentzer advocated even LESS exercise on his so-called “consolidated” routine, which consisted of two exercises for one set each performed every five days or so.

While most lifters will find such low volume to be too limiting for muscle growth and training enthusiasm over the long haul, Mentzer’s methods are thought-provoking and tend to give your training poundages a significant boost.

No one gains muscle as fast as we would like, but some of us have an even tougher time of it and really struggle to add ANY appreciable new mass. These “hardgainers” tend to be thin and lean, but really can run the spectrum of body types.

After butting his head against the training wall for several years, Stuart McRobert realized that he fit the hardgainer mold and decided to really analyze his lifting and come up with a better model for getting big and strong. The result was a compilation of techniques that had been around as long as barbells but which often get lost in the glitz of high-gloss muscle magazines.

McRobert began gaining and eventually wrote down his methods in several books Brawn and others) and a small training magazine that he published several times a year, but the main focus of his ideas was that lifters should focus on poundage progression using textbook form at all times. He advocates using abbreviated routines — somewhere between old-school HIT and Heavy Duty in terms of volume — but NOT always training to failure.

Rather, you plan lifting cycles so that each lift starts out well below your maximum training weight and then progresses over a series of weeks and months to new personal-record territory before backing off and starting over. It’s a common sense approach that has yielded impressive improvements for many hardgainers over the years and definitely worthy of closer investigation if you are struggling to progress.

These are all great variations on the high-intensity theme that you can use at throughout your training life, but there are certainly other forms of training that fit well under the HIT umbrella. Among these are Dorian Yates’ Blood and Guts approach, Dante Trudel’s DC Training, Dr. Ken Leistner’s legendary brutality, and many others.

Just because you’re doing HIT doesn’t mean you have to limit your creativity and variety when it comes time to hit the gym. Explore some of these variations to keep your training fresh and you’ll never be bored with your lifting again.

If you want to learn ALL about the best high-intensity training workouts of all time, checkout this new eBook called "Greatest HITs: The Best High Intensity Workouts" at https://www.muscle-building.com/