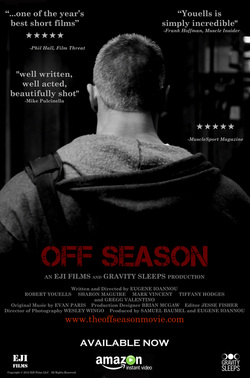 Off Season is a movie about a cop who gets into bodybuilding. The story line is the intense, unique demand that top level bodybuilding puts on a trainee. In this case, a new relationship with a lady friend comes under pressure as the trainers of the cop demand a 24/7 commitment that bumps into his relational involvement.

This is a short and intense film (less than half an hour in length), and it deals as much with the relational aspect of bodybuilding as it does the training. It has won praise as being one of the year's best short films. Interestingly, the film uses some black and white training scenes to convey the workout from a different, more intense angle.

The story is about two individuals who are both needy and their ill-fated relationship, with bodybuilding intertwined. Gregg Valentino is one of the actors in the show and does a really good job in his acting part, and the primary actors are noted for their strong performances as well.

The film is available now through Amazon.com and is worth the look at the commitment side of the sport if you are willing to open that potentially painful door to the inner side of bodybuilding.