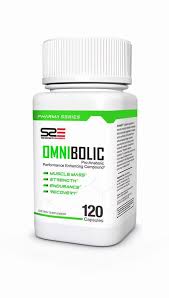 The primary active anabolic ingredient in Omnibolic is the natural herbal steroid, Ecdysterone. Imported directly from Russia, the Ecdysterone in this product is extracted from Rhaponticum carthamoides and is guaranteed to be 98% (or higher) pure. This (and only this) remarkable plant extract, (at this potency), has been proven in numerous clinical studies to be more anabolic than methandrostenolone (Dianabol), with no androgenic or other undesirable side effects. Omnibolic is a non-hormonal dietary supplement that will cause a huge increase in anabolism but will not effect hormone levels.

The Russian ingredients in Omnibolic have also been clinically proven to increase in strength and endurance. This is the same exact ingredient that the Russian government gave to its athletes prior to competitions in order to optimize performance while coming off anabolic steroids to beat doping tests. Strangely enough, many Russian athletes performed better in competition while using Ecdysterone than they did in preparation while on anabolic steroids.

If you are wondering why you have never heard of Ecdysterone before it is because this information has been somewhat classified until the collapse of the Soviet Union and since then it has been way too expensive (over $20,000 a kilo) to bring real Ecdysterone from Rhaponticum carthamoides to market. UNTIL NOW!

This is the first time ever that this material is being made available and you have our guarantee that nothing you have ever tried will work better than Omnibolic for adding lean muscle mass. Because Omnibolic is a non-hormonal supplement it can be safely used by both men and women. The Ecdysterone in this product is Ecdypure TM material, guaranteed to be 98% or higher pure Ecdysterone. Omnibolic will not cause a positive test result for any banned or controlled substance. Omnibolic is a 100% safe and legal dietary supplement.

Ecdysterone has also been shown to be an adaptogen. This basically means that it has other physiological advantages in addition to increasing muscular development. Part of the advantage of this product includes an increase in mental, physical and immunological capacity. The pioneer studies were conducted by Professor Vladimir Syrov of the Research Institute of Plant Substance of Chemistry, Academy of Science of Uzbekistan, and specifically proved that the ecdysterone derived from Rhaponticum carthamoides possessed anabolic properties in both animals and humans. His original work was done primarily with Rhaponticum carthamoides.

How Does Ecdysterone Work?

In each cell there are 3 forms of ribonucleic acid (RNA) which are involved in the production of protein. All of this protein synthesis occurs at the level of the ribosome. Basically, the process involves 3 states:

1. Ribosomal RNA (rRNA) gives instructions to the poly-ribosomal complex to join together specific ribosomes into forming a complex (group). This is the manufacturing facility where the proteins and muscle tissue are formed.

2. Messenger RNA (mRNA) travels from the nucleus where it has received the specific genetic code on how to make a specific protein. This is very much like a reel-to-reel tape going through a computer in which specific instructions are being given at an extremely rapid rate. The mRNA travels into the poly-ribosomal complex and runs across the ribosomes, giving specific instructions which result in exact sequences of the 22 different amino acids being placed together to form a specific protein (muscle).

3. Transfer RNA (tRNA) then move the amino acids to the ribosomes so as to allow the mRNA tape to hook up the individual amino acids to form the polypeptides (protein chains).

Realize that the Russian and Japanese scientists determined the specific location of Ecdysterone's actions were at the level at which the transfer RNA translates amino acids into proteins at the ribosomes. Thus, Ecdysterone increases the rate at which proteins are manufactured. Synthetic steroids affect the instructions from the nucleus, called transcription. This can pose a problem in that, if one has hormonally sensitive cancer, it can increase the rate of cancer growth within the body. Ecdysterone, on the other hand, affects the translation of amino acids into protein, which does not influence the rate of growth of cancers. This makes the Ecdysterone products totally safe, having no effect on the hormonal levels of the body. Researchers have proven that beta-ecdysterone has no side effects, except that it improves liver function, kidney function, heart function, muscle size and physical performance. Because of the other sapogenins within the herbal complex there may even be other medicinal benefits which can help an individual, such as anti-viral, anti-bacterial and immune stimulating properties.

Where to Buy Omnibolic For Sale?

Sadly Omnibolic is longer available. But you can still get an ecdysterone supplement that is just as good if not better, checkout Ecdy-Bolin.