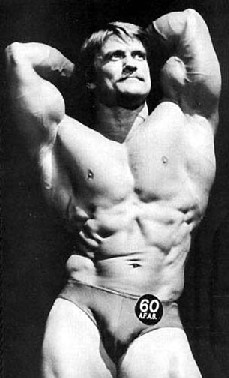 Roger Callard is a bodybuilder who began at the young age of 5.

Roger Callard grew up in Chesaning MI where he began bodybuilding at the very young age of 5. His father was very interested in weightlifting and because Roger has asthma, his father encouraged him to practice as a way to expand his chest and lungs to improve the asthma.

Roger Callard began competing in his home state and in 1978 won the Mr. USA title. After this win, he stopped competing because he was viewed more as a model and actor than a competing bodybuilder. He possessed a love of carpentry because of his family's history in the furniture industry.

In high school, Roger Callard was an all-around athlete and member of the National Honor Society for academic excellence. He graduated with a pre-law degree from Michigan State University.

Roger Callard projects the image of a good looking model and actor with a handsome face and muscular body. Bodybuilding is still an important part of his life today.

Although he was one of the well known bodybuilders of his era, he was better known because of his modeling and film career. Roger Callard had numerous roles in movies, films and television shows. He can also be seen in the film Pumping Iron. Go to Pumping Iron Video